Two years ago, I went to Poland to visit a friend who was there for his Erasmus program and there he met a Slovenian girl. English level in Poland is quite low and, in addition, we were in Bielsko-Biała, which is not exactly the capital, so we managed to get understood primarily via the Slovenian girl and the similarities that apparently exist between Polish and Slovenian languages.

One day, we were waiting for the bus to go to Auschwitz and it was quite rainy, so we went into a bar in the deepest Poland that had one of those machines that you put coins so you can choose which song you want to hear. We pay the price and chose Black Betty by Ram Jam and Africa by Toto. And nothing happened, no music was played at all. And trying to complain to the owners of the bar was impossible because, of course, they speak no English at all. So we let it be and just waited until it stopped raining.

When we were there for about 15 minutes, suddenly Black Betty started to be played with the resulting surprise. We thought, "Well, then, Toto's Africa will come." But no, Black Betty ended and nothing else. We left the bar without hearing Africa.

But later, when we were on the bus to Auschwitz for a while, suddenly she realized that the radio was playing Toto's Africa. What a coincidence, how fun. So the first time she came to Vigo to visit me, to make the joke, I also began to play Toto's Africa without warning to surprise her and make them remember that time. Since then, this became "our song" and every time he came to visit me, I play it at the moment of her departure.

One day, she decided she would give a surprise to him and, while he was in his usual place of residence in Lugo and she was in Slovenia, she would take a plane to come here and take a bus to his flat without he knowing anything about she coming here. When he heard the doorbell and opened the door to found her —and she supposedly being at home in Slovenia— you can imagine the surprise. So, as in any healthy relationship would happen, he decided to take revenge.

And later, since he was working for a few months in Bavaria and I was going to visit him, he decided to use me for his revenge. I would go to visit a German friend in Konstanz and then I would meet him in Munich to go together to Slovenia and give a surprise to her, since she was not aware that I was going (i.e., I was the surprise).

To get a more spectacular surprise, I thought that I could appear while Africa song was playing. So, while on the bus from Munich to Ljubljana, we downloaded the song and my mate edited it to crop it and get just the chorus.

We arrived in Ljubljana, started to play the song, I appeared, she was surprised and it was all joy.

It turns out that, for some reasons unknown for me, in some parts of Slovenia they worship potatoes. They have a sculpture of a potato to which they often take their foreign visits to venerate it for a while. So, as it can't be otherwise, they also took me there. I took a photo that tries to pretend I'm hugging the potato but actually it seems like I'm drunk and fell asleep on top of it. But hey, we got satisfied with this photo and left.

So, a few days ago, while browsing among the few audio files that I have in my phone, that piece of Africa that we had prepared started to play and what is my surprise when I realize that the cover that Android chose for that audio file is that potato photo. How did Android know that that photo and audio file were related? And this is how Android managed to amaze me and scare me at the same time. 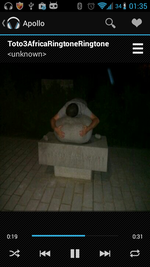 Comments are moderated, you can expect delay until they are published.

Your email address is only used to fetch your Gravatar image and it's not stored.
You can omit it if you want.